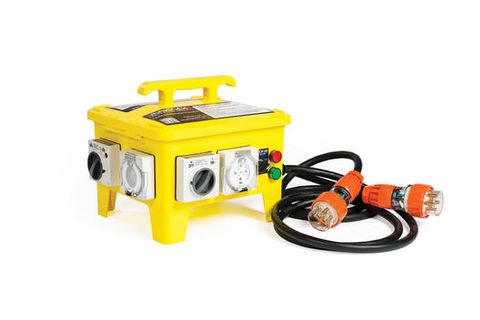 CHALLENGES ON THE JOB

Until recently, concrete grinders and polishers only had the choice of Pantech or Trailer Mount generators to power their machines and these options don?t always provide power to where you need it.

Makinex has recently launched the innovative Makinex Parallel Box that works in conjunction with Makinex Generators to provide machines with 20kva to 32kVA of power for where and when you need it.

A key challenge for work sites can be restricted and/or tight access and large stationary generators don?t have the flexibility to move around to where you need power.

In addition to this, you want to be able to transport and park all your machinery so it?s easily accessible and hence a compact power supply is crucial.

The Makinex Research and Development (R&D) team recognised the industry needed another larger kVA generator option which was compact and portable.

Nathan from Makinex R&D had this to say; ?We wanted to create a power source that could service heavy duty equipment. This power source needed to be flexible, be generally less expensive than larger units to buy, transport and store as well as being highly portable.?

This led to the creation of the Makinex Generator range and Makinex Parallel Box.

This video shows how the Makinex Parallel Box combines the power from 10kVA and 16kVA to operate a 3 phase concrete grinder and single phase dust extractor.

Makinex Generators are the most compact and portable power supply systems available in today?s market ensuring you have power where and when you need it.

The innovative Makinex Parallel Box enables you to combine the power of the Makinex 10kVA and 16kVA generators in any configuration generating between 20-32kVA with any single and/or 3 phase outputs.

Comprehensive field testing with the Makinex Generator range has proven its ability to respond to varying power loads over long periods of time for a range of both large and small machines.

The Makinex Generator range and Makinex Parallel Box provides you with a portable power supply that can withstand variable loads over long-running periods for an extensive range of leading brands.